Pay with credit card or PayPal

Or pay with credit card

Give your pets the power to communicate their problems – call today for a pet psychic reading.

While animals may not use language, they can express themselves in other ways. Our MostGifted Pet Psychics can translate animal signals and telepathic messages to solve problems and give you accurate insights into what your pet is trying to communicate.

Challenges such as aggressive behavior or inappropriate habits can often be traced to unresolved issues from the past or current changes in the home. Health issues and end of life wishes can also be addressed. Let us help you get to the root of your beloved companion's problems and foster a new understanding between you and your pet.

Q: How does animal communication work?

A: Just like with humans, psychics can use telepathy to contact and communicate with animals. First, a connection is made. Then the animal's thoughts and feelings are explored through questions and dialogue.

Q: What if I'm skeptical?

A: Many people can't imagine mind-to-mind communication with an animal. However, even skeptics with animal companions in their lives acknowledge non-verbal communications, such as when an animal knows its owner is suffering from an illness and becomes more attentive, or when a stranger has bad intentions and the animal tries to warn its owner. MostGifted Psychics can interpret even more delicate signals from your pet.

Q: How does animal communication help?

A: Lots of ways. Most common is behavior problems, such as unexplained aggression, constant barking, or suddenly refusing to use a litter box. Understanding your pet's perspective is the first step to solving the issue.

Q: What are the limits of animal communication?

Barney was a stray dog, thin and malnourished when he appeared on Melissa's door. Although Melissa was very soft in her approach, Barney still cringed, acting very submissive. Around strangers Barney was even worse, running outside to safety or cowering in corners. Melissa called MostGifted Psychics because she needed assistance gaining Barney's trust, wanted to be able to take him for walks by leash, and have Barney respond to voice commands. After communicating with Barney, our psychic discovered Barney's previous owner encouraged dog fights and scrimped on dog food, so the dogs had to compete for nourishment. Our psychic crafted a series of confidence and trust building exercises Barney and Melissa could do together."I really appreciate what MostGifted did for Barney.  Now, my little nieces and nephews can go up to Barney and pet him. I can take him out for walks to the park, and he doesn't fear other dogs. I really appreciate finding out about his past, and helping him grow into becoming a great companion."

Dingy the cat suddenly started urinating outside of the litter box, usually in a corner of Lisa's bedroom. Lisa took Dingy to the vet to check for a urinary infection or other medical issues. There was no ailment diagnosed. Lisa then called MostGifted Psychics to see if Dingy was feeling something she didn't understand.  Lisa was in a new relationship with a man, who had started spending the night. Tanya found out Dingy was afraid that her owner had a new partner, and didn't know what to expect. Dingy feared she'd get less affection or possible lose Lisa entirely. "My MostGifted psychic helped me understand the situation from Dingy's perspective. She let me know that Dingy needed much more affection and reassurance that I would never leave her. I made a specific point of buying a few extra kitty treats and play toys. Now, Dingy no longer rips around the apartment at 2 AM or silently pees next to the dresser."

Tanya called MostGifted Psychics when Maxie's aggressive behavior toward visitors kept escalating. Maxie would growl, bare fangs, and nip at guests who entered the apartment. Maxie was particularly aggressive to a cable installer, leaping at him. The usual disciplinary tactics were not effective. When Tanya spoke with our psychic, she discovered that as Maxie entered adolescence, he felt the need to assert himself, as if he were the king of Tanya's apartment.  By keeping the visitors in line, Maxie was protecting his domain ─ and Tanya as well.  After discussing Maxie's behavior with her MostGifted psychic, Tanya was able to get Maxie to express his dominance through more appropriate means. "Maxie is a very dignified doggy now. My parents visited and noted Maxie's improved behavior. He's a much friendlier dog now. Maxie has always been loyal to me, so it's great to have him direct his energies in positive directions." 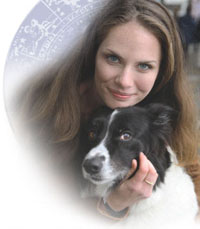 How can I help my pet?
What is my pet thinking?